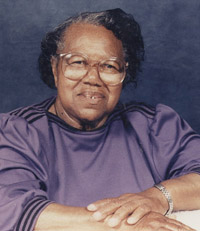 The Freedom Quilting Bee, an outgrowth of the civil rights movement, was established in 1966, as local people were losing their income and sometimes their homes on local farms after registering to vote. Father Francis X Walter, an Episcopal priest and civil rights worker, saw the potential economic value of quilts he saw hanging on a clothesline and helped our group get started.

With the help of many other volunteers and with the strong leadership of Estelle Witherspoon, the Bee's first president, our work was displayed at the Smithsonian Institution, contracted by Sears, and sold at stores like Bloomingdale's. More recently, after American quilt patterns were made available to China by the Smithsonian, quilts have been produced by other countries and sold very cheaply in the U.S. The Bee has diversified by selling a wider range of products, including conference bags. 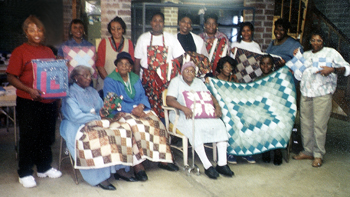 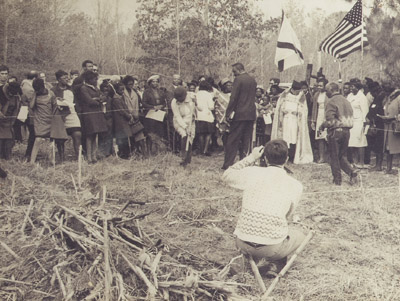 Groundbreaking at FQB site in March 1969

In 1968, the Bee purchased 23 acres of land where we built the present production site. Eight lots were sold to families that had been evicted from their homes. From 1970 to 1996, the Bee leased part of our building for a day-care center. 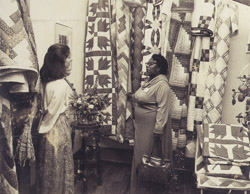 For many years, the Bee was a member of Artisans Cooperative, which helped us to develop additional products like potholders, placemats, napkins and aprons and which sold our products in five stores in the Northeast.

A group of women in Syracuse, New York, heard about the Bee and opened a store called the Bear Paw to sell our quilts and other products.

The Freedom Quilting Bee is a charter member.of the Federation of Southern Cooperatives, a regional technical assistance and advocacy organization. The Federation has provided technical assistance to us over the past thirty years. RDLN graduate Alice Paris, Director of Special Projects for the Federation, earned her master's degree in the RDLN program and.assisted the Bee to explore new enterprises as her RDLN Field Project. Members learned silkscreening as part of this project, with a view to making this an in-house function in the future.

Through RDLN's coordinated fundraising process, we have gained support from the Presbyterian Hunger Program and the Episcopal Church for new equipment, management upgrading and training.

For more about the group's history, see The Freedom Quilting Bee by Nancy Callahan (University of Alabama Press).